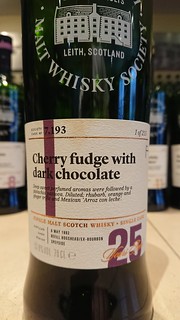 The nose has plum, damson, cherries and fine leather in the background. The mouthfeel is thin with a little cling. The body has cinnamon, which is quite dominant - underneath it there's plums and red apples. The finish is cinnamon and plum.

Water brings out thin whorling that settles into brief mottling. The nose gains more leather and some cinnamon. The body is much more balanced - peach melba and a subdued cinnamon. The finish is peach, plum and cinnamon.