This isn't a distillery the SMWS has seen very often. It's supposedly a peated variant of the the distillery's usual output although this is a very light example. All of this led to much discussion. 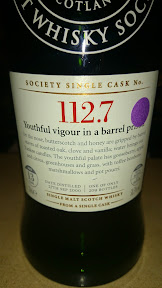 An interesting nose of glossy magazines, butterscotch, vanilla and a faint cinnamon. The body is light, sweet and soft - a slightly cloying toffee, cream soda, balsa wood. The mouth-feel is velvet. Pure velvet. The finish is vanilla and a slight cinnamon spice.

Water produces compact whorls which linger momentarily, but don't spread out. The nose has lost the glossy magazines, and the butterscotch and cinnamon have floated up to the fore. The body has a touch of green apples alongside the toffee and cream soda, and the balsa wood is replaced with a slight blackcurrant note. The toffee is a little smokier now, which was a pleasant surprise. The finish is longer toffee and blackcurrant, with faint hints of cinnamon.

A fine dram with a remarkably smooth velvet mouth-feel. I'm not sure when I'll drink it, but I know I'll enjoy it when I do.