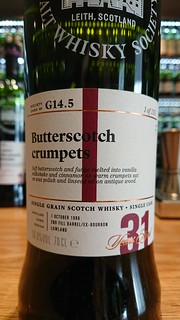 A very good outturn this month, which resists the temptation to go “Full St. Patrick’s Day” on us all. But there’s still some Irish whisky – two in fact. So that we can explore the differences between them. Which is the theme of this outturn – differences between spirits from the same distillery. To that end there are two Bushmills, two Glen Grants and two Craigellachies.

When dividing up the previews the SMWS made sure to split those three pairings between myself and Matt. But I managed a crafty end-run around that and tasted the other halves of the pairs at the ticketed preview tasting, and I’m reassured that this is more than a mere gimmick – it’s well worth comparing the two of each, as they’re significantly and delightfully different.

So let’s get on to the usual list of bottles, ordered by their impact on my impulses…

I’d like more than one bottle of the gorgeous fudge and butterscotch in the Dumbarton. It’s a superb whisky.

There’s four bottlings I’d like a bottle of – the crazy 9.160 Glen Grant, with its exuberant delivery of flavours; the deliciously fruity and flinty Glen Elgin; the stunningly balanced 44.100 Craigellachie; and the fruit and tar of the peated Glenturret.

And now we’re into honourable mentions – the part where I admit that I found it not to my palate (usually due to spiciness), but it’s gained a high technical score because it showed integration and balance. And here we see the Bladnoch and the 51.16 Bushmills. Each scored a deserved 4.5. If you’re buying me drams of those then I’m not turning them down!

I can’t wait to finish this list, because although there are a couple of lows there’s a lot of great scores – two 5’s, four 4.5’s, and six 4’s so far.