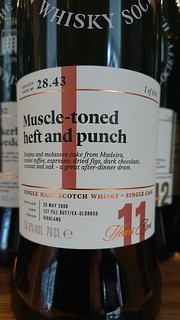 It’s the big one.

Only two drams didn’t arrive in London - the Ardmore and the Glen Scotia. Of the 39 that did arrive, 9 of them are ones I’d like a bottle or more of, which is a remarkable ratio.

At the top of the list is the Tullibardine. Be honest, you weren’t expecting to read that, were you? Yet the delivery is perfect and the flavours complementary: dried fruits, Madeira, cinder toffee, dark chocolate and coffee grounds. It’s superb.

Next on the “more than one bottle” list is the Tomintoul. Another sherry monster, and only 7 years old. If the cask had been left longer, it would be far too much. It may have a little spirit on the nose, but everything else is superb. A lighter take on sherry, with peach, strawberry, apricot, dried apple - brilliant.

And the last on the podium is Rosdhu. Balsa wood and fruits - blackcurrant, pear, green apple, kiwi fruit, banana... It’s a sweet delight that shows grain doesn’t need to be old to be good.

There’s plenty in the “I’d like a bottle” category, too. For many the star will be the slightly bonkers Bunnahabhain, whose red wine cask brings a combination of pipe tobacco, soot, red berries and plums. It’s quite the combination! The Benrinnes is a steal, being perfectly matured at its age. It delivers peach, sponge cake, green apples and young oak. The Old Pulteney has rock pools, candle wax, pear, coconut and liniment - it’ll sell quickly. The Caol Ila is seafood barbecues, lemon, driftwood barbecues and ash. A familiar Coal Ila, yet lovely all the same. The Glentauchers is the other end of the spectrum - fresh cut grass, rosewater, pears, sponge cake. Brilliantly balanced and delightfully light. And finally the Glendronach has caramel, créme brûlée, cinder toffee and oranges. Softer and sweeter without water, bigger and heavier with it, it’s the best of both sherried worlds.

Honourable mentions? The unusual peated Allt-a-Bhainne, the elegant Glenfarclas, the first unpeated Glenturret for a while, and the Auchentoshan should all be investigated. There’s a lot of good whisky to go around... And we're not even at the end of the year yet!

Matt's reviews are available over at The Dramble, as per usual. The list was divided up randomly, but I think that worked in my favour this time - hence going back the next day to taste the other half! That having been said, he still got some of his favourite distilleries, so it all worked out well.