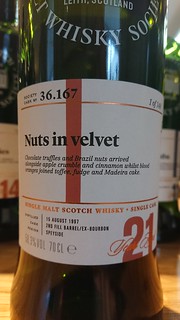 So the bad news is that the SMWS have plainly been holding out on us – they’ve saved a lot of good casks for the end of the year!

My only possible complaint could be that two of the whiskies didn’t turn up in time for the preview tasting – neither the Linkwood (39) nor the North British (G1) were around. You might expect that not having the North British would colour my perceptions, but there were so many good whiskies that it’s hard to hold that grudge.

With six of the Deep Rich & Dried Fruits category and five bottles in the various peated categories, they’re really spoiling us.

The star of the list for me was the Benrinnes, which is a superb example of what happens when good spirit sits in a good cask. Plenty of fruit with a little vanilla and fudge, I want more than one bottle! And at the other end of the spectrum sits the Glenturret, with farmyard notes and maple syrup joined by lemon and toffee. Another one that would clog up my shelves with multiple bottles if I could...

Moving down to the ones I’d be happy with a bottle of, let’s start with the Glenfarclas – oranges, old oak, leather, with more fruit and dark chocolate. That sherry finish worked brilliantly for this whisky. Then there’s the Glendronach, which is another sherry bomb from a PX finish. Dried apricots, sultanas, caramel and pineapple with hints of leather make this a very attractive dram. Moving to peat, the Ardmore is superb – beach bonfires, apples, peach and ash. Then there’s a great Caol Ila, which has black bun, bonfire smoke, toffee and hints of lemon. Finally, there’s a St George’s that provides bonfire smoke, pencil shavings, toffee and calamine lotion.

It seems that I’ve gone for the big extremes, but they really are good. That having been said, the scores were well above average and there’s plenty to enjoy. If I had to pick some “runners up” they’d be the Clynelish and the Craigellachie. The Clynelish has is all of the lemon, pineapple and wax what you’d expect from a Clynelish of its age; the Craigellachie has a rich balance of honeycomb, vanilla and cinnamon.

I managed to try everything that had arrived in London, knowing that we’ve got a bigger list coming out soon. If it can keep up this level of quality, then we’d best all get ourselves bankruptcy lawyers…

I was fortunate enough to try meet up with Matt from The Dramble for this tasting, which has no doubt improved my notes. His notes can be found here, and are excellent as usual. (Judging by Matt's reaction on the day he'd be especially grateful if none of you bought the Glenturret. It's his precious...)