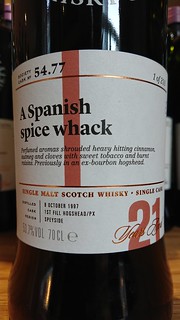 September’s list has some great whiskies on it. There are four that I want bottles of...

The star of the list is the Aberlour - a superb sherried dram that has a magnificent balance of flavours. I didn’t just want a bottle, but I also gave it the top technical score of 5 - the first 5 for a while! On the other end of the flavour scale is the superb lemon-fest Glenlivet, which is a sweet and succulent dram. In a similar mould is the banana, pineapple and pepprmint of the Glendullan. And finally, there’s cinder toffee, sultanas, leather and fresh oak in the peated Glenturret.

Frankly, the four of them make for a pretty stunning tasting that covers most bases.

As always, the other half of the list has been tasted by Matt at The Dramble, so if it’s not in the list below then head on over there for it.