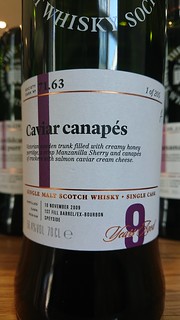 The nose has old polished oak, dried flowers and hints of oranges. The mouthfeel is thin with no cling. The body has coconut, cinnamon, honey, cinnamon and then more cinnamon. Quite warm. The finish is cinnamon and oranges.

Water brings out thin, rapidly expanding whorling that quickly settles into lingering mottling. The nose gains sherry and some white pepper, along with some saltiness. The body gains white pepper and sherry, and the cinnamon is somewhat reduced. The finish gains white pepper.

This was never going to be my favourite whisky, but the water tamed it a little. Still too spicy for my tastes though.

One for spring evenings.