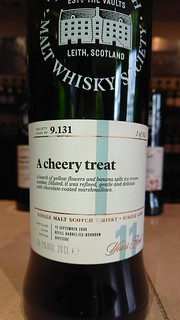 It's that time of year again - the slog through the SMWS glut of whiskies before Christmas!

This list is small - just twelve whiskies - but has a surprisingly high average score. In fact, nothing got below 3.5. Not even the spicy whiskies!

Conversely, nothing got a 5 either. If we were hoping for the giddy heights of Outturn 257's Bladnoch, we're a little out of luck. But the Glen Grant, the Benrinnes and the Bunnahabhain all got a score of 4.5. If I had to pick between them, I'd plump for the Glen Grant - its floral, fruity sweetness is very much my kind of dram. But the fruit and ginger of the Benrinnes is charmingly disarming, and the Bunnahabhain has a curious combination of citrus, ginger, smoke and pickled onion that can be filed under "shouldn't work but does".

I can also recommend the Dailuaine, Aberlour, Linkwood, Laphroaig and Highland Park, as each scored 4. The Dailuaine and Aberlour are classic young refill bourbon casks, which will please many. The Linkwood is a fruity sherried bomb of flavour, and I suspect will be much in demand. The Laphroaig was nowhere near as TCP dominated as I'd feared, delivering a clean coastal hit of sweetness. And the Highland Park is very peated - not what I'm looking for really, but it holds it all together very well to produce a fruit and smoke mix that will drive some people crazy.

When looking to summarise this list I recalled reading recently that some Port producers have started returning a portion of their production to older, less efficient methods. The changes made over the years had created consistently high quality Port but there were fewer of the truly stellar, mind blowing casks. Someone finally realised that by removing the variance that created poorer casks, they'd also removed the possibility of the brilliant ones.

It's not bad. It's just different. And unexpected! I'm sure we'll be back to the rollercoaster of scores soon enough...