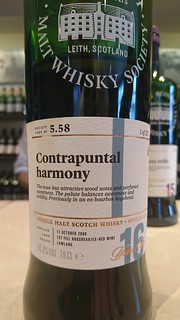 Another month, another outturn. It's the same old story. Some interesting cask finishes, a good range of flavour profiles, and some excellent whiskies.

Oh, and the SMWS's second ever blended malt.

And boy, did that ever cause some fuss amongst the traditionalists!

I've long believed that the SMWS should do interesting things that help whisky drinkers broaden their experiences and challenge their preconceptions. So I'm a fairly happy bunny.

If you're not a sherried whisky fan, you're going to hate it. For the rest of us, it's a good whisky. In a blind tasting, nobody would be complaining that it's a blended malt. (I suspect it would do quite well.)

So, way from the hubbub and drama - how were the other drams?

Lots of spice on this list. My favourite was the Auchentoshan, followed by the Linkwood and the Exotic Cargo itself.

I'm hoping that the Society will follow up the Exotic Cargo with a bourbon-cask based blend. But I think that will take a while!

(Oh, I said that it was their second ever blended whisky... Technically their first was a dram called The Last Drop. It was made by combining the dregs of many open bottles into a blend. The result was... something that happened, and which nobody is in a rush to repeat. Not terrible. Not brilliant. Not worth repeating.)