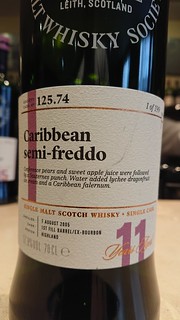 Annoyingly, some of the best drams are in the parcels. But 'twas ever thus with Christmas Parcels, so we shouldn't be surprised. The delicious citrus and spice Tullibardine and the fruity joy of the Glengoyne are superb, and if you like the rest of their parcels then they're well worth it! Otherwise, get to a bar and enjoy a dram or two!

Outside the parcels, two drams jumped above the rest - the delightfully tropical Glenmorangie and the wonderfully rich Highland Park. Quite different in their styles, but both exemplary.

There are, for the second list in a row, too many drams that scored four to list. A whopping sixteen! If you add those to the four mentioned above, that's 20 out of 29 with four or above - a highly respectable amount!

I suspect a lot of people are going to be buying themselves a little present or two...