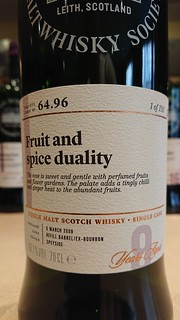 The nose has a lot of fruity notes - turkish delight, a newly opened packet of fruit gums, and a slightly darker note in the background - oak cutting boards? The mouthfeel is thin with no cling. The body has banana and turkish delight, then ginger and cinnamon. The finish is very short - cinnamon and banana.

Water brings out thin, compact whorling that settles quickly into lingering mottling. The nose gains cinnamon and oak cutting boards, and loses the turkish delight - the fruit gums remain but are diminished. The body gets spicier - more cinnamon and some nutmeg, which overwhelms any other flavours that may have been hinted at (oak, banana?). The finish is a prickly, drying cinnamon and ginger with some nutmeg.

One for cold autumn nights.