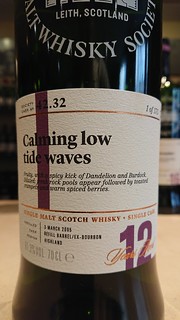 The nose has sweet lemon notes, with pineapple and bananas with hints of orange peel. The mouthfeel is thin with no cling. The body has banana, pineapple, toffee, and hints of cinnamon coated brioche. The finish is cinnamon and banana, with a hint of pineapple.

Water brings out thin, rapidly expanding whorling that settles quickly into brief mottling. The nose gains the brioche note from the prior body, and loses the sweeter citrus notes. The body gains more pineapple and cinnamon and loses some of the toffee. The finish gains more cinnamon.

A very sweet and unusual dram from this distillery - one for spring afternoons.

(This whisky is usually thought of as dirty. But if this bottling were the proverbial Catholic schoolchild, then it's before - not after.)