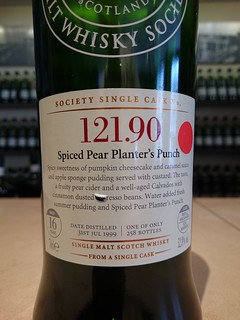 The nose has vanilla sponge cake, apples and hints of sultanas. The mouthfeel is thin with little cling. The body has apples, dusty bookshelves, apple brandy, cinnamon and then a big hit of spiced pears. The finish is short, with cinnamon and a hint of tobacco.

Water brings out tight, thin whorling that expands rapidly and settles into lingering mottling. The nose now has an almost musty feel, followed by apples and cinnamon. The body is sweeter, but still dominated by cinnamon spices. The finish is unchanged.

A great dram, slightly too spicy for me but that fantastic Arran spirit is clearly there underneath.