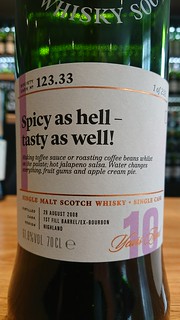 The nose has toffee, fresh oak, marzipan and hints of cinnamon. The mouthfeel is thin with no cling. The body has toffee, oak, vanilla, horseradish and star anise. The finish has oak and horseradish. Fine at first, but it builds the heat with each sip, rapidly becoming untolerable.

Very spicy. It’s good that there are other flavours in there, but this was never going to be my favourite. It is, however, well constructed and balanced, so gets a decent score for that.

One for spring afternoons.